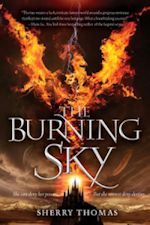 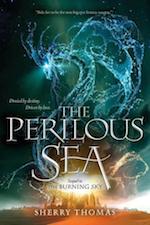 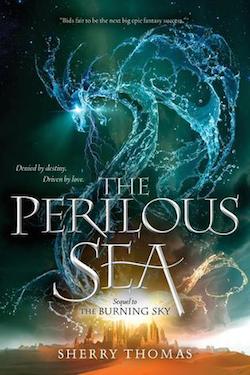 This book is available in audio.

After spending the summer away from each other, Titus and Iolanthe (still disguised as Archer Fairfax) are eager to return to Eton College to resume their training to fight the Bane. Although no longer bound to Titus by a blood oath, Iolanthe is more committed than ever to fulfilling her destiny—especially with the agents of Atlantis quickly closing in.

Soon after arriving at school, though, Titus makes a shocking discovery, one that makes him question everything he previously believed about their mission. Faced with this devastating realization, Iolanthe is forced to come to terms with her new role, while Titus must choose between following his mother's prophecies—and forging a divergent path to an unknowable future.

This book is available in audio.

The girl came to with a start.

She was being pelted with sand. Sand was everywhere. Beneath, her fingers dug into it, hot and gritty. Above, wind-whipped sand blocked the sky, turning the air as red as the surface of Mars.

She sat up. Sand swirled all about her, millions of sepia particles. By reflex she pushed at them, willing them to stay away from her eyes.

The sand stayed away.

She blinked—and made another pushing motion with her hand. The flying particles receded farther from her person. The sandstorm itself showed no signs of abating. In fact, it was worsening, the sky becoming ominously dark.

She had power over sand.

In a sandstorm, it was much better to be an elemental mage than otherwise. Yet there was something disconcerting about the discovery: the fact that it was a discovery; that she’d had no idea of this ability that should have defined her from the moment of her birth.

She also had no concept of where she was. Or why. Or where she had been before she awakened in a desert.

Nothing. No memory of a mother’s embrace, a father’s smile, or a best friend’s secrets. No recollection of the color of her front door, the weight of her favorite drinking glass, or the titles of books that littered her desk.

She was a stranger to herself, a stranger with a past as barren as the desert, every defining feature buried deep, inaccessible.

A hundred thoughts flapped about in her head, like a flock of birds startled into flight. How long had she been in this state? Had she always been like this? Shouldn’t there be someone to look after her if she didn’t know anything about herself? Why was she alone? Why was she alone in the middle of nowhere?

She pressed two fingers against her breastbone. The pressure inside made it difficult to breathe. She opened her mouth, trying to draw in air faster, trying to fill her lungs so that they wouldn’t feel as empty as the rest of her.

It was a minute before she gathered enough composure to examine her person, praying for clues—or outright answers—that would tell her everything she needed to know about herself. Her hands were not forthcoming: a few calluses on her right palm and little else of note. Pulling up her sleeves revealed blank forearms. A look at the skin of her abdomen likewise yielded nothing.

“Revela omnia,” she said again, hoping that the sound of her own speech might trigger a sudden cascade of memories.

It didn’t. Nor did the spell bring to light any secret writing on her skin.

Surely her isolation was only an illusion. Nearby there must be someone who could help her—a parent, a sibling, a friend. Perhaps that person was even now stumbling about, calling for her, anxious to locate her and make sure that she was all right.

But she could hear no voices carried upon the howling wind, only the turbulence of sand particles hurtled about by forces beyond their control. And when she expanded the sphere of clear air around her, she uncovered nothing but sand and more sand.

She buried her face in her hands for a moment, then took a deep breath and stood up. She meant to start on her clothes, but as she came to her feet, it became obvious that she had something in her right boot.

Her heart somersaulted when she realized it was a wand. Ever since mages realized that wands were but conduits of a mage’s power, amplifiers that were not strictly necessary to the execution of spells, wands had turned from revered tools to beloved accessories, always personalized, and sometimes to a silly degree. Names were woven into the design, favorite spells, insignia of one’s city or school. Some wands even had their owners’ entire genealogy engraved in microscopic letters.

She would dearly love to see her family history laid out before her now, but it would be more than good enough if the wand had a In case of loss, return to ______ inscribed somewhere.

The wand, however, was as plain as a floor plank, without any carvings, inlays, or decorative motifs. And it remained just as bare when examined under a magnifying spell. She had no idea such wands were even made.

An oppressive weight settled over her chest. Loving parents would no more give a child such a wand than they would send her to school in garments made of paper. Was she an orphan then? Someone who had been discarded at birth and brought up in an institution? Elemental magelings did suffer from a higher rate of abandonment, since they were so much trouble in their infancy.

Yet the clothes she wore, a knee-length blue tunic and a white undertunic, were of exceptionally fine fabric: weightless yet strong, with an understated gleam. And though her face and hands felt the heat of the desert, wherever she was covered by the tunics she was perfectly comfortable.

The tunics did not have pockets. The trousers underneath, however, did. And one of those pockets yielded a small, rectangular, and somewhat crumpled card.

She tried several different unmasking spells, but the card provided no hidden messages. Expelling a slow breath, she put the card back in her trouser pocket.

She had thought all she needed was a name, the tiniest of clues. But now she had a name and a clue, and it was worse than if she’d had no insight at all into her past. Instead of staring at a blank wall, she was looking at a single square inch of tantalizing color and texture, with the rest of the mural—the people, places, and choices that had made her who she was—remaining firmly out of view.

Without meaning to, she slashed her wand through the air, all but growling. The swirling sand retreated further. She sucked in a breath: eight feet from where she stood, a canvas tote lay half-buried in the sand.

She launched herself at the bag, yanking it out of the sand. The strap was broken, but the bag itself was undamaged. It was not terribly big—about twenty inches wide, twelve inches high, and eight inches deep—nor was it terribly heavy—fifteen pounds or thereabouts. But it was quite remarkable in the number of pockets it had: at least twelve on the outside, and scores upon scores inside. She unbuckled a large outside pocket: it held a change of clothes. Another of similar size stored a rectangle of tightly packed cloth that she guessed would expand into a small tent.

Pockets on the inside were carefully and clearly labeled: Nutrition, each pack one day’s worth. Vaulting aid: five granules at a time, no more than three times a day. Heat sheet—in case you require warmth but need to remain unseen.

In case you require warmth.

Would she have addressed herself in the second person—or was this evidence that someone else had been intimately involved in her life, someone who knew that such an emergency bag might come in handy someday?

Thirty-six pockets of one entire interior compartment were stuffed with remedies. Not remedies for illnesses, but for injuries: everything from broken limbs to the burn of dragon fire. Her pulse quickened. This was not a camping bag, but an emergency tote prepared in expectation of significant, perhaps overwhelming danger.

A map. The person who had meticulously stocked the bag must have included a map.

And there it was, in one of the smaller exterior pockets, woven of silken threads so slender they could barely be discerned with the naked eye, with mage realms in green and nonmage realms in gray. At the top was written, Place the map on the ground—or in the body of water, if need be.

She lay the map flat against the sand, which, with the heat of the sun blocked by the turbulent sky, was rapidly losing its warmth. Almost immediately a red dot appeared on the map, in the Sahara Desert, a hundred miles or so southeast of the border of one of the United Bedouin Realms.

The middle of nowhere.

Her fingers clutched at the map’s edges. Where should she go? Low Creek Ranch, the only place she could name from her former life, was at least eight thousand miles away. Desert realms typically didn’t have borders as tightly secured as those of island realms. But without official papers, she would not be able to use any of the translocators inside the United Bedouin Realms to leapfrog oceans and continents. She might even be detained for being somewhere she shouldn’t be—Atlantis didn’t like mages wandering abroad without properly sanctioned reasons.

And if she were to try nonmage routes, she was about a thousand miles each from Tripoli and Cairo. Once she’d staggered to the coast of the Mediterranean, assuming she could, she would still be at least three weeks from the American West.

More words appeared on the map, this time above the very desert in which she was stranded.

If you are reading this, beloved, then the worst has happened and I can safeguard you no more. Know that you have been the best part of my life and I have no regrets.

Long may Fortune shield you.

She passed her hand over the words, barely noticing that her fingers were trembling. A dull pain burned in the back of her throat, for the loss of the protector she could not recall. For the loss of an entire life now beyond her grasp.

You have been the best part of my life.

The person who had written this could have been a sibling, or a friend. But she was almost entirely certain that he had been her sweetheart. She closed her eyes and reached for something. Anything. A name, a smile, a voice—she remembered nothing.

No, it was her, screaming with all the frustration she could no longer contain.

The sandstorm shrank away, as if afraid of what she might do.

She panted, like a runner after a hard sprint. About her, the radius of clear, undisturbed air had increased tenfold, expanding a hundred feet in each direction.

Numbly she spun around, searching for what she dared not hope to find.

Nothing. Nothing. Absolutely nothing.

Then, the silhouette of a body in the sand.